It’s supposed to be the season of ‘mists and mellow fruitfulness’, but the mood in the countryside is far from mellow when it comes to the Government’s proposed changes to the National Planning Policy Framework (NPPF).

Alarming headlines warn us that the new proposals represent “a threat to the countryside” (Daily Mail), “threaten [the] green belt” (Telegraph) and “will destroy Britain” (Guardian). So why are the headlines so alarmist?

The environmental community fear that their concerns about unchecked rural development will be brushed aside in a mad rush to stimulate the economy – something they regard as short-termist.

A loose coalition of individuals and organisations including the Campaign to Protect Rural England (CPRE), the National Trust and Greenpeace have come together to voice their concerns. They are calling upon MPs to fight against the proposed changes and are hoping for an outcome similar to the u-turn on the sale of national forests.

However, there is significant support for the proposed planning reforms from the business community. Stewart Baseley, Executive Chair of the Home Builders Federation, said: “Scaremongering by anti-growth groups has resulted in negative reports and a false impression that threatens to stunt constructive discussion over how to shape and guide development in the future.”

During Prime Minister’s questions in the Commons on 14 September, Mr Cameron tried to pour oil on troubled water, telling MPs that proposed changes would favour localism over centralism and that local communities therefore had nothing to fear. He also pledged that green belt land would be protected.

Nonetheless, the new proposals represent the biggest shake-up of planning since the Town and Country Planning Act of 1947. The consultation period ends on 17 October.

Whatever the outcome of the debate it’s our belief that the best decisions are made based on good information. FIND Maps offers all the information required to build a complete picture of the spatial context of a planning application.

Whether you need mandated environmental reports, high resolution aerial photography or OS MasterMap, at FIND Maps we pride ourselves on providing timely access to professional data.
Posted by FIND Mapping at 09:00 No comments:

Sustainable Drainage Systems (SuDS) and the Flood and Water Management Act 2010 - Are you ready for the changes?

Following the disastrous flooding of 2007 the government investigated the root causes of the flooding. But are you ready for the resulting legislation?

Traditional thinking was that water runoff naturally ran into natural drainage ways, into streams, rivers, when the volume got too much the rivers would overflow and cause flooding. Our drainage infrastructure would lead urban runoff away from sites and delay its entry into river courses, hence reducing the volume of water that might cause fluvial flooding. The investigation of the Pitt Committee actually concluded that the root cause was actually our drainage infrastructure itself.


We had become so reliant on being able to channel runoff into our inbuilt drainage network that it was simply unable to cope. Linked to climate change which has meant that sudden heavy downpours have become more common and you have a recipe for disaster. If you add in that the massive influx of water often contained runoff pollutants then the situation becomes even more severe.

In response to this the government introduced the Flood and Water Management Act 2010. Two key recommendations were included:
Flood Control has become local. The legislation has received Royal Assent and Industry standards and regulations are being finalised, the objective being that the Act will be fully implemented and enforceable by March 2012.

What are Sustainable Drainage Systems (SuDS)?

For those who have been fortunate enough to travel to many parts of the world, say Florida or Texas, you may have asked yourself why is there so much water around lying in ponds or swampy areas? Why don’t they drain it away and reduce the number of mosquitoes? These are examples of Sustainable Drainage Systems (SuDS), also known as Sustainable Urban Drainage Systems (SUDS). Simply put, control rainfall onsite and minimise the runoff of this water into the drainage system. There are many ways that this achieved by for example retention ponds, roof attenuation, swales, seepage areas or even grey water recycling, such as storing it for future use.

All of these methods need to be considered by developers or land purchasers, or their consultants when planning projects. Each of the Lead Local Flood Agencies will set a quota for the amount of water that is allowed to drain off your property and enter the public water system. Anything above this is your problem to deal with inside your local SuDS design.

All SuDS plans submitted for approval to the SAB will have to have the following characteristics:

Environmental, geological, hydrogeological and contaminated land issues become critical to the evaluation of the type of SuDS system that can be employed on a site. Alongside the cost benefit analysis the above are crucial factors. Certain SuDS methodologies simply will never be approved in certain instances.

Bearing in mind all the above factors it is critical that when designing a SuDS system that full and comprehensive analysis is made of geological, geotechnical and environmental factors.

FIND Maps is able to assist organisations by providing rapid viewing, printing and export capabilities for all of the relevant datasets. Our EnviroFIND service allows you unlimited, intelligent viewing of EA and certain BGS data sets for as little as £ 25 per month. Additionally, we have a range of products which will be coming out over the next few months to assist in your SuDS project planning. 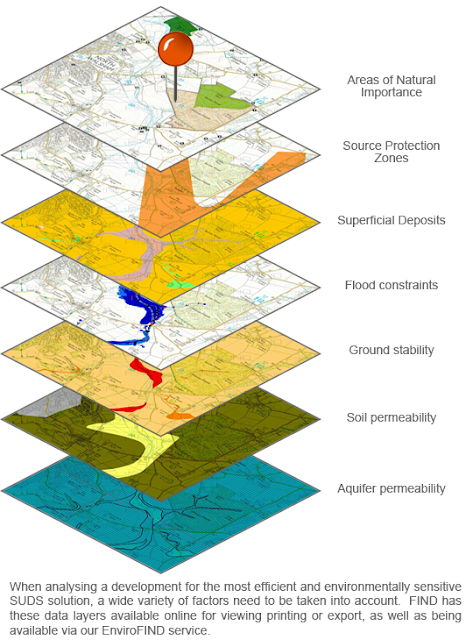 Posted by FIND Mapping at 12:04 No comments:

Public assets map could save £7 billion

A project to map publically owned properties has revealed an astonishing amount of potential savings through better asset management.

Last month Communities secretary Eric Pickles unveiled a map of more than 180,000 public buildings as part of a push to rationalise the public sector estate. The map details the locations of buildings owned by almost 600 public bodies and 87 English councils.

Pickles said: “I want the public sector to take a good hard look at what they own. By cataloguing each and every asset councils can help government find innovative new ways to utilise them, improve local services, keep council running costs down and save taxpayers’ money.”

A recent independent report also found that local government and the public sector could save up to £7bn a year in operational costs through better property management.

FIND can map your businesses assets and display them on findmaps.co.uk or your own site
Posted by FIND Mapping at 15:38 No comments: