Land quality and geotechnical teams always need comprehensive data to support their professions. Recent open and flexible data licensing are really helping, but this is not always the case, with some datasets a lot more ‘open’ than others. 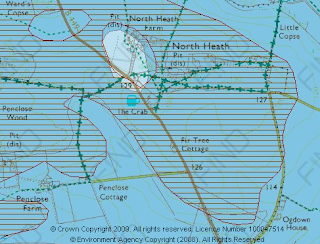 Currently, the new maps are only available on-line through the EA’s ‘What’s in your Backyard’ feature, however, the EA have also released an Advisory Note. The note explains that the ‘EA has not released these datasets for commercial resale as these are British Geologiocal Survey intellectual property’. This is because the aquifer classification is based on the BGS 1:50k DiGMapGB-50 data. Its even been been seriously suggested that the new aquifer classification data will eventually become additional attribute fields within the BGS 1:50k DiGMapGB-50.

This has massive cost implications for an environmental consultancy wishing to hold this dataset at a national level. Previously, an annual data licence for UK coverage of the Environment Agency's Groundwater vulnerability dataset in a GIS format was in the order of £2500 per annum. A recent enquiry suggested a licence for a WMS (Web Mapping System) for delivering the 1:50k digital maps for internal business use into a commercial company for UK coverage from the British Geological Survey would be well over £100k per annum.

The current trend that data producers and suppliers in the public sector are working together to produce up to date datasets has allowed innovative services like FIND and the companies who use us to blossom. However, often issues relating to intellectual property rights, data licencing and copyright put too many restrictive barriers in the way of being able to share and make these datasets available. While we appreciate producing joint licensing arrangements among large data providers may prove tricky, having major data sets out of reach environmental companies fighting a recession, goes against the trend of opening up data. We look forward to changes in this area, and offering the new aquifer maps on FIND.

What do you think? - Why not get in touch and let us know your thoughts.

Read more about aquifer data on FIND
Posted by FIND Mapping at 15:45